Monday night in Golden Valley. The air was calm, the field perfectly mowed crosses, and the temperature was as perfect as baby bear’s porridge. Every reason for an old athlete to step into a pair of white size 13s with one neat black shoelace contrasting the other thin leather lace that was purchased at a gas station and more fit for a hiking boot. But, the player didn’t care. He was free to step away from parenting, school, and responsibility for the next two hours or however long it took to decide the balance of two fall beer league games. The teammates mostly other number crunchers for state’s biggest retailer shed their bullseyes for a softball on their chest that appears to be hit by Zeus.


The opponents, younger and wanting victory more than the mere act of showing up for entertainment or a break from the sometimes grind of ones parenting and career driven schedule. They fill up a cliché checklist of douchebagettes: flat-brimmed hat tilted at 15 degrees with nationally accepted sport s team that they don’t even watch, long basketball shorts perfectly pressed, arm tribal tat, and the need to yell “WHOOOOOOO!” after every hit, run, error, or out. They attempt to quash the fun, make the 15 minute ride to the park, alone for once, not worthy of taking free-time to regain a minute piece of younger days.

But, over the Jersey Shore-rejects black painted wire mesh dugout is a path. Neatly striped with green divider lines and encasing the two softball areas with a loop that also branches beyond the 300 foot marker in left over a railroad crossing and up a steep hill and disappearing into trees. The first baseman managed to scoop up a few throws in the dirt and found the arm cannon a little rusty but still able to fire an accurate bullet and steal the cocky kid’s thunder after throwing him out at home after a short-hop hit the side fence. He would launch a tirade worthy of Ozzie Guillen or Bobby Cox or Earl Weaver if you’re so inclined. The red never wavered, with an icy calmness of a man that’s all-in holding pocket nines and no card under a jack sitting on the board. But, the first baseman just jogged off the field to take another look at that path and the runners that he never gave a second look to.

These people seemed to just popped out over the past five or six months. Driving home, the bright pink jacket with ear buds and some kind of wrist watch she kept pecking at. The sweaty guy with strides that resembled a pee-pee dance shuffled up the back road bridges incline turning into work around 6am. Walking with the kids to a spot about two blocks from the home where they can throw a few rocks from a mini-peninsula into a pond, there’s a older woman who never fails to impress with a pace that shows she does this often.

As the game wore on, more yelling with faux Brooklyn accents, and despite the close score of 17-16 in the seventh and final inning, the activity of the path seemed more interesting. Four high school aged girls with running shorts and t-shirts proclaiming not “call me maybe” but rather “cross country” zoom by as the sun took a dip behind the swampy area beyond the opposite field’s fence. A older gentleman was being assisted by likely his middle-aged son from the adjacent assisted care building. But, there was no pity, maybe some envy that he was free to walk the path while I stood on the field fenced in with ten people that I am more accustomed to see in Vegas. While the teammates were great examples of people you’d want to sit in the back parking lot where the rules state not to imbibe in beverages, the other team made the experience as tolerable as sitting line for Space Mountain in the middle of the summer.  McKayla was not impressed. 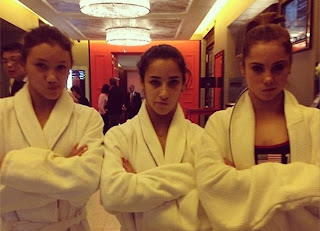 
Moved on perhaps? Running, while not the most exciting thing in the world, has at least added a goal. Something to shoot for, something to reach, something to do besides meld with a laptop and couch as schooling nears its conclusion next June. Since the ball does not fly off the bat like it once did, nor the glove snagging a hard-hit liner that tails away from pursuing glove, this new endeavor gives the old athlete a new goal that can continuously be stored and re-newed at anytime.

While the meatheads head off to bang some bitches and pound some PBRs, and a good night is waved to my fellow victorious teammates, my thoughts are on tomorrow and practicing to reach 5KM in 27 minutes with good friends spanning this country waiting at the finish line.