I thought I had my shit together.

While the end of this section of my life is about to end and start anew I feel as though my body is moving a few seconds too slow for my mind. No, this isn’t an attempt to regain past athletic feats but trying to not lose me. Spending time staring out of windows at home with viewpoints of (finally) melting snow, brown grass, and a familiar street with a far off window displaying a single strand of oversized red Christmas lights without a thought, and suddenly too many.

Bad thoughts, cashing out on the society as I know it with student loans due, being a role model at work, and hugging my kids despite trying to bang out a 1,000 word missive on Gauguin’s The Swineherd, Brittany (despite not being much of an art lover it’s a pretty kick ass painting). No more marriage, no more begging for affection when its needed, just taking a small roll and living off skills acquired whether they be academic or degenerate.

Feeling numb when elation should be flowing, that piece of paper which cuts through the glass ceiling is reachable like the cap and gown in an UPS box sitting under my bed. It hurts the soul to feel like there’s no one in the world that can touch this grey then be expected to man up and stop pouting and move on with life. It could be labeled depression, but the feeling isn’t down, it’s stuck in neutral like a blown engine that looks perfectly fine but has a few frayed wires that need connecting. Those wires show the abuse of overuse, too much thinking and not enough doing. Conspiracies versus giving into trust. Creating stories when there isn’t one to tell.

I blame no one but myself for this and I know this feeling is one that will come back as it does sporadically even after moving on to the suit and tie phase that I would have hit several years ago if I didn’t turn mush brained. But, my solid core will see this through I just need to put down my imagination for a few moments at a time and let things read as they are presented versus fearing the worst.


This was supposed to be a daily diary of sorts but life does not always comply with ones wishes including the pack of Gillette Mach 3 blades that my stomach has been trying to digest for the past three days. It could have been the return to long running as a seven mile jaunt around Maple Grove through Fish Lake regional park, Bass Lake road, and at least two other lakes in view were part of a beautiful “spring” day that ended with watching snow flurries with my wife at a local non-restaurant chain bar serving up some firecracker chicken bites that got my rum laced taste buds’ attention.

Or, it was looking at the final schedule for school. A cold sweat maybe some stress for an unknown reason as there are five classes with two of them being “seminars” for easing me into the workplace which I have already done on the corporate level for 15+ years. But, there are several holes in my suits game that need some pimping so it is a welcome sight to see the school and work getting me ready to make this leap once I walk across the floor at Roy Wilkins convention center in mid-July to receive my empty folder with instructions that the real degree is in the mail and should arrive in 4-6 weeks.

Or, is it the fact that in just 11 weeks the turmoil of my daily schedule will be reduced to being a trusted co-worker, a daddy who actually likes discussing the strategy of putting more character points into Constitution than Magic, or a husband that feels left out right now and wondering what will come next. A person could quote Red from Shawshank talking about people become institutionalized and getting used to a way of life. I got used to depending upon everyone for the majority of my life whether it be having someone repeat a piece of a lecture to having my wife and sister drive my broken head to and from work for a few years. But, for the past four years it has been a daily struggle to be a little selfish, a little independent.

On the dangerous roads of Westeros (Photo cred)

Honestly at my core I have zero real wants and it scares me. I enjoy the temporary and the excitement of a random get together with friends of similar intellect and levels of degeneracy. Hugging my kids and their warmth returned in kind. Watching Game of Thrones and Arya’s struggle with her journey to reach a home, a meaning. But there’s nothing long-term that I want. I could care less if I attain the corporate rank of Senior Inquisitor of the Northland General Ledger. Money does not really tickle me except to have enough to pay the bills, feed my family, and have fun on the side. The “next step” seems to be walking through that floating door from The Twilight Zone’s opening credits with nothing but imagination behind it.

No, I do not need religion or some other pre-drafted path to follow as much like my run last Friday, if the road to the right looks like fun that’s where I will run and I hope the next journey will present itself soon.


The NEW Frontier, Westward Ho, Stardust, and (cry) Imperial Palace. When a person says they are visiting Las Vegas there is a clamor for wishing that individual “good luck” or “don’t get rolled by hookers” depending on their level of potential degeneracy. In my case the word “wheelchair” comes up more than fifty times for good reason as my button for stopping most of the time short circuits after two consecutive dealer Pai Gows or just watching a winning craps table chest bump as another pass line bet makes it there.

This time was different, oh I still put a good dent into the city’s Captain Morgan supply, like .0002%, but the flavor or theme of the trip was unlike the WPBT trips usually found within these pages. No 5am steak and eggs after spending ten hours to lost five dollars at a table. Playing long enough to outlast everyone except the morning crew’s vacuum cleaners and the poor blonde in the sparkly silver dress with the slit cut nearly to her armpit waiting on douchebaggis maximus to stop berating the dealer from the Liaoning Province for flipping up a six card 21 after Mr. 35 degree hat turn pressed his bet up to ten dollars. 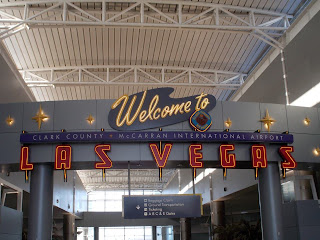 Nope this time was for good fun with the right people and avoiding the shit show that I usually dive in like Ndamukong Suh when he’s not busy stomping fellow professional athletes into the Ford Field turf.

My kids acted better in Vegas than at DisneyWorld to my surprise as the reins were iron tight, yet they both enjoyed the trip enough to ask when they could return. Small things like a 10 minute conversation along the revived Fremont Street with a sizable woman twisting balloons for their enjoyment as she seemed happier that someone made her feel human for 10 minutes than the nice tip for twisting up a flower and a motorcycle in latex for the boy and girl who managed to get both home to the frozen north four days later.

After my wife zipped from the new “D” casino down near the Golden Nugget on the new http://flightlinezfremont.com/ Flightlinez I took leave from the family for the only time while they were awake to meet up with two ladies with similar taste for drink and leaving politeness at the door. Writer Jen www.twitter.com/WriterJen and the lovely PokerVixen www.twitter.com/pokervixen managed to direct me a whole block away to foreign territory for this Vegas vet. Aside from golfing and watching my wife plummet to the earth in a parachute, I have not gone off Strip or Fremont. Ever.

But, a rocks glass of Templeton Rye and two intelligent ladies making their marks in Sin City was too much to pass up. As I abhor chain restaurants/bars, they turned me to the excellent Mob Bar http://mobbarlv.com/ to imbibe on brown liquids as I probably scarred them with a timeline of how I met my wife. The hospitality did not stop there as we hit up Cheetah’s for $1,000 foursome fantasy dances in the VIP with an eight-ball, Goose and Juice, and Peter Dinklage slipping into character for our amusement.

While a coked out story may be fun to type up, we actually more fun taking down the Four Queens instead. My gambling vice/leak has been and always will be slots. Those damn things with their Mr. Monopoly bonus game hopping around the square board hoping to land on Boardwalk for a plethora of pennies.

But, the player’s card offered a challenge to acquire X amount of points in exchange for a t-shirt. I love free t-shirts almost more than my kids and would even sit through a lap dance at the Glitter Gulch if it meant receiving a $1.99 ink pressed shirt with “Grinded dry at the Gulch” happily displayed across the chest. So, play we did moving from Wheel. Of. Fortune! To little fishes that refused to give up their bonus game like a pouty socialite refusing to drink anything but Cristal, we tried them all, and I managed to not only acquire the points but notched a decent win thanks to the Playboy machine that did not give out enhanced ta-tas but rather a few hundred for mild progressive win.

After bidding good night as PokerVixen carted me back to the Mirage by way of seeing Vegas’ attractions that do not offer a free buffet and 2-for-1 Bud Lights, I believe renting a car will be in play for the next trip. I found out that sitting in a $1/$3 NLHE game is quite boring if the tablemates include Ms. SERIOUS PRO GRINDER who was working her iPad to pass level 236 of Candy Crush , McLovin clone on my immediate right asking me no less than a dozen times in two hours if I would show my cards after placing a chip on top for the dealer, or even the smartly dressed Bro who defined his fellow Bros by actually being pleasant at the table and telling them to fuck off from the rail.

Will I be back? Of course. I may be “maturing” but my degeneracy is evolving rather than dying. And meeting up with the fine folks I’ve met through poker writing and now my family makes each return trip worth it.