It's not that I do not want to write about the surreal experience of the latest Mastodon Weekend and first completed Half Marathon in Greenville, SC with the people I consider my second family.

But, writing at the moment is limited to gigs (such as my recap of the semifinal match in the PokerStars All-Star Showdown between Galfond and Cates) from the man with the busted toe who finished a mere 12 seconds ahead of me at the 13.1 mile race (see below), and school work which you can sample my "work" on the lack of girls getting into physical and computer science positions. 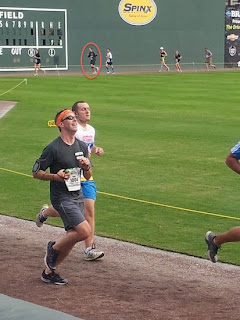 The man in the circle would be me (Photo cred linked)

But instead of an inward look at what that weekend meant to me (in due time because my chaffed nipples still rise from thinking about it) this is what I have been working on:

Type “Sam Gordon” into a web browser and the viewer will see girl dominating the male sport of football.  She literally throws her nine-year-old male counterparts aside with speed and agility that they cannot match.  This is rarity seeing females play the very physical sport of American Football where hulking males grow their bodies to obscene sizes and pummel each other with hits that can rival a car crash.  Women for the most part do not want to tune their bodies in this manner thus only a handful of women even reach the college ranks, like Katie Hnida who plays college’s top rank of Division 1-A for the New Mexico Lobos.  Even then playing the mostly non-contact position of kicker as the sport of football is deemed desirable to males only.  What about activities that do not involve 300 pound people try to tear limbs from each other in pursuit of a goal line?  Take computer science for example as Tillberg and Cohoon state “the growing gender divide in computer science is one of the more perplexing phenomena on college campuses today, especially considering the rising number of high school girls taking advanced science and math courses” (Tillberg & Cohoon, 2005).  Like football, younger girls are taking an interest in the game more and more, so why would girls taking the advanced placement-type math and science courses not be drawn towards the computer science majors and careers?
The answer lies within sexist and biased surroundings as most girls are not drawn towards majors like computer science because “prior research into choice of major or career generally has focused on personality factors that lead to a particular career path and identified ability, self efficacy, expectancy value, interest and congruence, and barriers and support as key components of whether a student chooses or rejects a particular major” (Tillberg & Cohoon, 2005).  Instead of allowing girls in high school and college to lean towards what they are good at objectively, they are subjectively pushed towards a major because of social factors instead.  This sort of peer and society pressure would dissuade would-be female computer science and physical science majors.  Thus, adding a layer of barriers for girls who have a genuine interest and talent for the computer and physical sciences to follow-through on a path that would grab an advanced degree and eventually work in these fields.
Awards programs such as ADVANCE given through the Professional Opportunities for Women in Research and Education (POWRE) are meant to consider balancing career and family the most significant challenge facing women scientists and engineers today. Based on these results, institutions must seek to remove or at least lower these and other barriers to attract and retain women scientists and engineers” (Rosser, 2004).  The POWRE group notes in a questionnaire that “60.3% of the respondents name balancing work with family responsibilities as the significant challenge to women scientist” (Rosser, 2004).  In this case, women scientists tend to put raising a family more important than furthering their careers, following an entrenched sexual stereotype that women should be the nurturing sex versus the hunter and gatherer.
Studies, such as the POWRE group’s, show why there are a lack of female computer and physical science majors. Teenage and younger girls are drawn and/or pushed towards believing that raising a family is more important than expanding their minds and developing academically towards a career that suits their talent.  Take the internet sensation Sam Gordon, if she were male showing this kind of dominance on the football field, there would be coaching trying to recruit her to train with them and hone her skills in hopes of parlaying that into a college scholarship or even a National Football League (professional American Football) contract worth millions of dollars.  Instead, Sam will likely play for a few more years until her competition’s physiques reach the point where her parents feel it is no longer safe for her to play thus wasting a potential talent.  How many girls testing high in science aptitude are turned away in a similar manner?  Lacking the parental or peer guidance to bring what could be a blossoming career in computer or physical science, many girls also let this talent shown at a younger age go to waste.