A different kind of recap

The past five days have been a chance to catch up on what has been hovering out me while I do my best Rodney Dangerfield impersonation minus the team of experts to write papers for me and the ability to pull off the triple lindy.

With the ladies doing their thing: 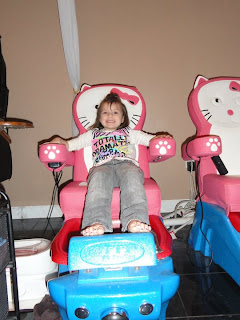 Color me amazed that she sat still for 20 minutes
I took the boy out for a guy's day (alas with no pictures, but a short video coming soon).  First, off a trip to Perkins for a hearty breakfast to soak up any remains of the previous evening's run to another victory in my favorite $5 PLO MTT for $200.  Quick aside on that:  It is now a multi-entry tournament at Full Tilt and while I don't buy all four entries, giving someone with an iota of clue for Omaha and making the final table one in three times (with a field around 250-300) isn't that tough. As seen with the FTOPS Main Event 7 out of 9 players were in for the max (6 entries), only two of them managed to get thru the massive 14K+ field to reach a shot at the $1 million prize (chopped by Blair Hinckle).

Did I have 6 * $640 to maximize my shot at a win?  Hell no, at least I wouldn't put out a good HUGE chunk of my bankroll to do so.  But, I DO have the funds to buy in multiple times at the levels I'm comfortable with ($5-$10 MTTs).  People who satellite in are left with the same issues as if they won a ticket to a rebuy tourney.  But, the responsibility goes to the person who is in the satellite, not Full Tilt, not those who can afford to blow nearly $4K, know the rules before playing the game.  There's good (massive prize pools) and bad (elite players can play looser knowing they get more than one barrel), again know the rules and plan your game accordingly, for the record I had two entries of the 277 that signed up on Thursday night, one finished in 53rd after aces were cracked, the other won the whole thing.

Now after biscuits, gravy, chicken fried steak, gravy, homestyled potatoes, and you know it MORE GRAVY it was time to hit the road with the first stop at SkyZone.  After getting to the massive trampoline park we were greeted by a massive line of weird high school/toddlers mix and a clipboard stating the next jump time available was another hour and a half away.

Quick dash home since my cell phone is the equivalent of something you'd see during a 80's John Hughes marathon on TMC and fired up the laptop to make reservations for later in the afternoon to give us time for a movie before playing dodgeball on trampolines with kids.  To my surprise the boy picked out Gnomeo and Juliet over MegaMind, after which I demanded he do two shots of Jack with me for manliness.  But the movie didn't start for an hour so we killed time at the local Dave and Busters where I refrained from a little hair of the dog and focused on winning enough prize tickets for the stuffed orange gorilla he wanted.

King Kong acquired and a Chipotle stop for more alcohol soaking goodness, this time wrapped a tortilla and smoothered with sour cream and pulled pork.

The movie did not disappoint as I managed to stay awake and enjoy it unlike last time while at the IMAX theater up in Duluth when I somehow fell asleep to the Dinosaurs documentary despite the volume going to 11.

Finally, hopped up on excitement we got to strap-on the blue boots at SkyZone to jump around like an idiot for an hour.  I lasted 30 minutes as my knees and dignity quickly fell in short succession.  My son however bounced his way around, up and down, flipping into a foam pit, and taking a Globo Gym-esque sized shot to the mid-section (he would have a tear and beg to get into another game five minutes later).  For $12 and an hour it was an awesome value. Then it was homeward bound for a pizza picnic (THAT'S INDOORS BECAUSE MOTHER NATURE INSISTS ON FISTING MINNESOTA LIKE A FIVE DOLLAR HOOKER IN THE BACK ALLEY OF HENNEPIN AVENUE).

Back to family time, and no I do not have Tourette's but would take every ounce of patience not to forearm shiver someone who is excited by the nearly two feet of snow we've received in the last two days.

Find a three foot icicle and promptly fuck yourself.  After five months of winter "sick of it" doesn't cut it, swearing and drinking are my equalizers.

Ok.  Back to the family moment.

Pizza, yes.  Me and missus who returned home from their day and new nails enjoyed bacon, pineapple, black olives and pepperoni while the kids opted for just the pepperoni as we watched Despicable Me which despite a bad review from my sister-in-law was very watchable and I dare say funny.  Loved the The Godfather/head of horse scene that Gru gets after the girls are sent back to the orphanage.

Both promptly took to their beds while I barely remember getting into mine.  For one day, daddy didn't have to "get a paper done" or "work", no instead daddy got some time to refuel the parenting engine and let his kids know the real reason why he's behind that laptop all the time.
Posted by Unknown at 6:55 AM

Family time, enjoy. Comes few and far between some times. Glad you had a good day.