"Yes sir, your queen high flush is no good in this Omaha game".

"Oh, I bet pot and raised for the first time in 45 minutes so you thought I was bluffing"?

The weekend started out at the 5th Annual Big Johnson Volleyball tournament in scenic (rustic?) downtown Albertville's 152 Club Bar where you can still get a draft for under $2.00 a pour and the waitresses/bartenders (they all pull double duty) have that hot farmer's daughter look and tight jean shorts to match. 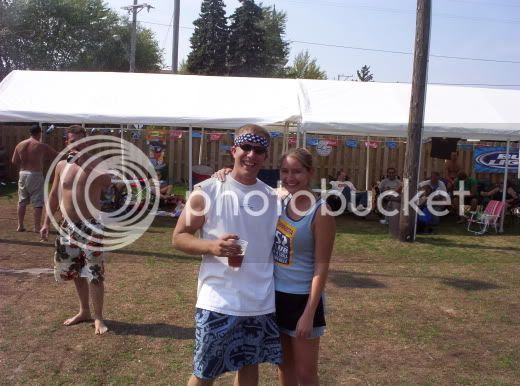 Our team captain Rice takes time out with the one and only waitress at the tournament trying to serve 11 co-ed teams worth of drunken volleyball players. Never waited more then five minutes for a beer timeout. Can't get that kind of service in the Cities. 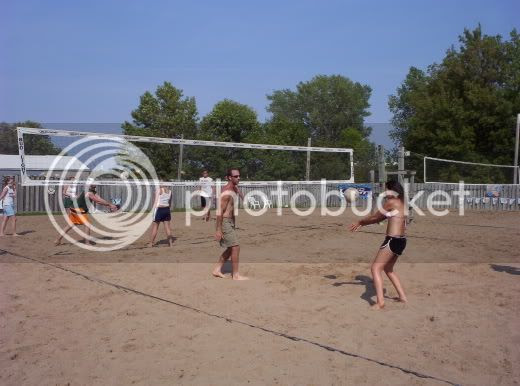 A photographer I am not. Maybe I'll rent out the AlCantHang Bar Hopping Photo Studio to do the next volleyball shoot. If you look way to the right there's probably another eight ladies with long legs in bikinis ready to go on the court.

Our team Sticky Rice took home 2nd place out of 11 teams and $150 in FAKE MONEY after walking through the pool play 4-0. For some reason beers seems to cut my vertical in half and during the final match as I couldn't put down spikes and our team didn't walk over the final two teams in bracket play as we did in pool play. It paid for the bar tab, breakfast, and a couple of scratch off lottery tickets. Can't ask for more.

I'll keep it to a minimum because I'm sure Daunte is feeling bad about coming out like flat tire on a 75' Pinto. The only good news was the rest of the NFC North looked equally inept on Sunday. Lions/Packer game was only exciting for the final five minutes. Da Bears couldn't manage ONE FUCKIN FIELD GOAL to make my betting week a wash. I did like the Vikes defensive debut, aside from that useless 3rd down long TD run by Caddy Williams, they played some great defense and outscored the offense. Something I thought only the Ravens did.

Next week, no excuses for coming out flat. Five turnovers for one of the top QBs in the league is inexcusable. You can do it Daunte, rest up and kick some ass next week.

Yes I'm still giving away money at the tables, but there's a difference... I'm taking some back as well. Ok maybe Party is just giving me the money directly. $27.36 profit from the latest re-load bonus. Wasn't it a $100 reload bonus? Yes, yes it was. I shot for mediocrity and attained unremarkable.

My leak at the present time? Gifting a stack. Yes, the "aw fuck it" hands have come back. Four times this weekend I CALLED knowing I was beat and blew my well earned stacks. Beating the game otherwise is not my concern, those four hands are my concern. It wasn't chasing a low or overbeting a low with no possible high, it was betting with 2nd, 3rd best knowing the nut hand was out there. That sounds like "gun shy" talk, but in Omaha its not. Many times that King high flush will pay off your nut flush. Straight with a flush on the board? Most people can't lay it down, even in the $100 and $200 games. I rarely profiled other players while playing hold em' and maybe that's why my results have been break-even. In Omaha 8 or better, I carefully watch who's chasing naked A2 low draws, who's betting with straights with a flush is on the board, and who's smart enough to fold two pair under resistance.

Ya thunk this here ob-sore-vation thingy might lead to profits?

Stupid is, stupid does sir.

Also, I broke down and purchased PokerTracker Omaha to see if I'm really profiting from this game. I haven't put in my Stars NLO8 games yet, but the initial Party and Interpoker numbers gave me a hard on. I saw green numbers for the first time since FDR was president and a gallon of gas cost less then my hourly Limit Hold Em win rate at the .05/.10 level. Its nothing spat-tack-u-lar but its a start on the road to profitable poker for once. Which makes heading to Vegas in December for the WPBT event easier on the bankroll. Well... at least the plane ride, can't budget for the umm, kosher activities while there.

Thanks for dropping by, now if you've felt like you're always coming in second best just go to this website and you won't feel as bad. Hitting that one time out of 21. Ouch. I've seen better odds on a roulette table.

Edit ALERT: If you haven't already, Professional Dice Thrower and occasional Blogger tourney crusher Bill Rini has the next WPBT live event set. My pale ass will be there alone this time, and I will need to be kept on a leash. Who will be my chaperone at 4am while playing $1/$2 limit hold em?