As I move with the rest of the world from Microsoft Word 2003 to Microsoft Word 2007 and the massive new icons that could be confused with a World of Warcraft interface. If I kill anyone during these typed words accidentally using some kind of Ice Lance/Dragon’s Breath combo, blame Bill Gates.

Many things done, many more to do. There’s bemoaning that 2008 brought nothing but stress and extra creases to people’s foreheads. Sure, with the daughter taking the terrible twos to a level probably seen by a few readers here, it has been a daily struggle to keep up her energy and defiance. But how could you be mad at a face like this: 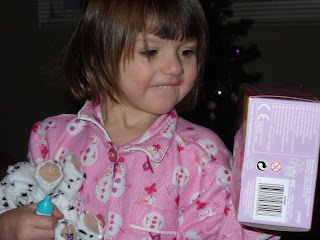 I struggle to keep a straight face with every "no!" and "I don't do that!" but the parenting suit requires some kind of instillation of order and discipline into her life in case her aspirations in life wish to go further then flipping burgers at McDonald’s.

The boy also gives some trying days but those seem to melt into the week more often as he’s learning the invisible boundaries of mom and dad. My hopes remain that he finds whatever he’s looking for in life and enjoys growing up (but not too quickly). So far he’s following the same path as old man with a love for video games and detest forming the perfect Q or attempts to draw a snowman that looks something different then a metal chain link with a top hat. 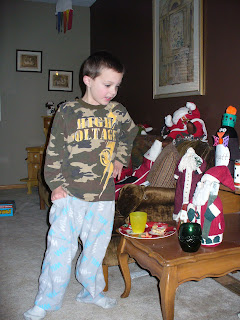 I asked my wife for one thing this Christmas, it carries no price tag in the monetary sense but the worth for our marriage is immeasurable. No person should have to give up living and as someone who took five years of his life staring at a blank wall with little reason to lift up the covers in the morning. There are hints that she’s ready to live again, breaking away from the shells of depression and self-doubt with every victory on Scramble and smile after a spilt glass of milk. Being a parent doesn’t have an all-encompassing guidebook for dealing with a sullen husband one second and cleaning up a potty training daughter the next. I’d like my wife back as I have missed her dearly.

As for me, I just had a few requests.

Still have fun. Trips to Chicago, Philly, and of course Vegas help to recharge the batteries with friends I wish we’re a little more accessible then via Northwest Airlines. This year should be no different, anyone up for bar games prop bets?

Be a better husband. Give space. Give hugs. Give encouragement. Give myself.

Learn more. Rosetta Stone, you’re going to get a new customer, habla taco y salsa? I don’t want to show up the genius that came up with that salmon spread at Bouchon’s, but I’d like to progress beyond ripping open some plastic and setting the microwave to 1:45 and remembering to turn over the nuggets half way through.

Poker. I lost my keepyourpokerface.com gig (thank you Google!) but gained a big one when Otis gave me a great opportunity at the PokerStarsBlog and my hopes are people enjoy reading those recaps and live blogs. I realize this isn’t a permanent, career changing gig, but I’ve never been happier that someone had the confidence to take a shot with me. Much like the friendships found thru this silly card game, I hope to ride out the job like a mechanical bull in Key West and hold on for all its worth regardless of possible bruised inner thighs.

Email ThisBlogThis!Share to TwitterShare to FacebookShare to Pinterest
Labels: Self-Gazing