Last year about this time me and three other fellow beer enthusiast decided a week prior that we would make an effort to get to our favorite brewery a little early for their once-a-year, limited edition beer called "Darkness".  Surly Brewery where Omar and Todd put their collective hop heads together and spawned a home in Brooklyn Center around 2005.  Since then the following of this beer has steadly grown since the days we would drop by on cold Saturday mornings to wait in line to swap out empty growlers for fresh product which sometimes included a small batch of speciality beer that the owners have been working on. 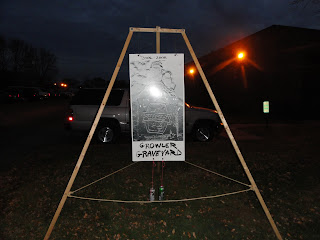 Growlers (2006-2008) R.I.P. my dark glass encased friends
After the city put the kaboooosh on selling directly from the brewery due to city ordinances, growlers ceased to exist except for nice trophy cases above refrigerators across the state of Minnesota.  But, that didn't stop the flow of microbeer lovers from worshipping such finely mixed beverages.  No, the reaches of the songs of "Darkness Day" grew despite the release timing of the annual brew being in late October into November as Minnesotans know that despite what other states call "fall", winter's onset usually takes place while shuffling kids around the neighborhood in their Power Rangers outfit bought at Target along with 542 other things you didn't need there but bought just because.  Much like a casino, you can't walk inside a Target without spending money. 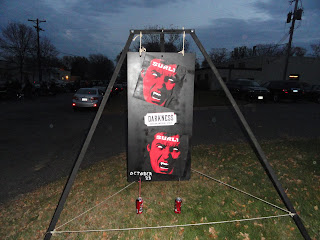 Darkness label 2010 style
After dancing around severely underdressed last year, showing up like amateurs at around 8:30am with bellies full of Sausage McGriddles, our group decided to kick things up a notch this year since the lines were getting noticeably longer at even earlier hours. This year it was no impromptu journey to the warehouse district in Brooklyn Center, we planned our attack to be at the brewery at 6:00am with folding chairs (unlike last year where we sat our posteriors on a nice, cushy ass-frozen curb), a cooler filled with beers that a long-time friend filled with a yummy selection from his gate of beer heaven, and of course bean bags! Six hours is a long time to wait and chat about just beer although the subject has conversation power and less likely to invoke religious or political backlash because beer is fuckin awesome unlike Glenn Beck. 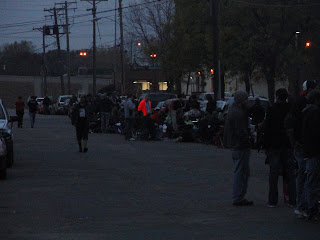 7:36am - Do you know where your beer is?
Just an hour and a half since we parked ourselves on the corner with shots of hot cider and Sailor Jerry, the line started to inch out towards the highway already and would hit the end of the block by nine am.  Fanatic much?  People were setting up grills and one had a full open tent complete with 24" TV with an XBox360 running while our neighbors in line toyed with a iPad and of course playing "Angry Birds".   I inquired politely if he bought the tablet computer just for the game, he snickered just like I was his mother asking why the ceiling tile was off-center after hastily putting away a 6 month old Playboy and went back to demolishing those nasty pigs.

After eight am and the above picture I retired the camera to its resting place because batteries are a bitch and everything electronic should have the ability to be willed to life (yeah, I suck, NICE PREP WORK IDIOT).  After sunlight approached and the weatherman's prediction of rain thwarted (take THAT Sven Sundgaard!)my friend B grabbed a bottle of beer that had it's own box and was wax capped to something called an offering table.  I have a shitty cell phone pic of it, but it was literly beer porn laid out for anyone with a glass to sample some of the finest beers around the world (but mostly from the US).  It was here that I started observing license plates from Tennesse, Illinois, Wisconsin, Dakotas, and New York?!?!?  To think my commute to the brewery was a whopping 10 minutes these guys took toll ways and mostly likely started their trek on Thursday.

After sampling a few of the beers (as you can tell I am not expert on the subject matter to expound on the savory tastes within, I just consume, a lot, because I enjoy something better than Mich Ultra while watching Brett Favre's ankle tank my beloved team's last chance at a winner for the next 10 years), there were two food trucks set up for noshing and one had these donuts with a seemingly ring of incased butter on the inside that made me moan like the time my wife...  ok I'll stop right there, but honestly, AWESOME.  I had two bags because one was an insult.  I think it was this one "Chef Shack" feel free to correct me of course.  But, after being recognized in line as "that cornhole champion from SurlyFest" (yes, my abilities known state wide people) it was time to hop in line for wristbands as my wife joined the crew to up my purchasing power to two six-packs. 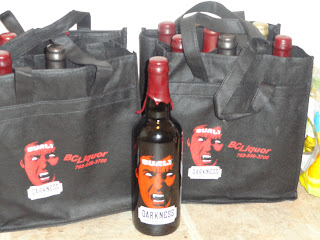 What $200 in beer might look like
And fin. The beer is now sitting in the cellar with one bottle marked for a Chicago fan who will probably try to a take bath in the bottle and other things that should only be seen on chatroulette. The rest I'll figure out as tonight marks the first night I'll be able to sit and enjoy what will hopefully become a yearly journey to that small brewery that made it big.

See beernews.org for another recap and more photos of the event.
Posted by Unknown at 7:03 AM

Cool write up. I hope the local paper covered this as well. What a funny event.

I know the Star Trib took a pic of my buddy B, not sure if it made the print though.