Last to the party, still leaves with the hottie

I final tabled a tourney last week (possibly, maybe, don't know) anyway after watching Lady Gaga for the 16th time today while eating a box of Cheerios with hopes of soaking up my party for one last night I fired up Full Tilt after a running my mother to Grand Casino Hinkley as an upcoming birthday present.  Why yes I played slots next to women chain smoking Virgina Slims while wearing enough make-up to paint my son's second grade class as clowns for Halloween in a few weeks.

Won at slots, won with kids who enjoyed their $15/hour babysitter which included Skid Row's reminder that she ooooonly seventeen SEVENTEEN working the desk and asking if I'd like her to put my penis someplace around that severely stretched polo shirt.  After remembering that my mom was five feet away and I'm married and don't wish to go to jail or be that creepy old guy who hits on high school chicks with their mothers sitting in close proximity, I took the wristband with my children's name on it without further incident as there was some gambling to do.  Slots, slots, and more slots after seeing a sad dealer with no players at the Pai Gow table.  Pai Gow normally a degenerate activity goes to level 23 if you play alone, besides my mom needed me to needle her by winning on every other spin while she plunked down twenty after twenty while chasing Mr. Cashman.

After padding the WPBT trip roll a bit, being disappointed that Ms. Jail Bait had been replaced by a cross between Velma and Grimace, and taking down the prime rib buffet that actually doesn't suck it was time to bring the kids home and straight to bed.  "No, no booze tonight" said my body so I jumped into a play chip PLO8 game with Bluff's newest all-star KevMath and TheKeyLime.  Needed little something, I spotted my new favorite $3.5K guarantee Rush PLO8 rebuy tourney in late regs.  I almost missed the cut off but managed to plunk down two shiny dollars in time.

Three hours later I walked a lad through the ropes of making a three-way deal... 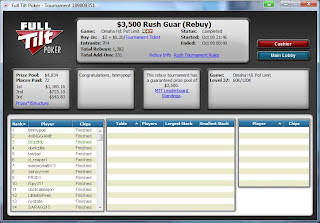 I wonder if this is the other side of variance that I haven't seen for a couple of years.  Any how, happy.  Much.  Still not going to drink anything heavier than cherry flavored kool-aid.
Posted by Unknown at 12:28 AM

Time to go pro. Nice hit (I seem to be saying that a lot).

Thanks Doc! I mean it about the scotch, getting you and Bammer a decent drink in Vegas. Maybe prior to the WPBT tourney. I'm sure Aria has a good selection.

Congrats. I want in on the whisky action (assuming I make the trip)!

Wasn't that Winger and not Skid Row?

But man nice work. If I still played online I'd be especially impressed. :)