A little more than a year ago, the air musky with a hint of despiration smelling like Great Aunt Lovey's den.  Once the center of attention in year's past and as soon as that afternoon now contained a tired group of on-lookers and even more depleted group of players.  The raised poker table had six players left from the 2009 Binions Poker Classic Omaha Eight-or Better tournament as the clock turned into the single digits of the morning.  A far cry from the high rolling pros who called this casino home for the month long endurance series called the World Series of Poker for three decades, now forced to offer local grinders and discount tournament players a series at 1/10th the cost of the bracelet chasers and "famous" pros.

A deranged woman who like someone just tossed her puppy into a microwave fidgeted back and forth with a sack of papers that became more and more of mess with every meth-addled step.  From my vantage point in the four seat, a group of scribes had rolled downtown from the Rio and decided to cheer on a half-deaf kid from Minnesota playing the one game he felt comfortable enough to sit with anyone.  Despite their tired faces, the smiles gave me a greater high than oxy, ecstasy, and Jesus ever could.  If you want to get into those writers shoes for a brief moment I highly suggest reading this post, then clicking here to buy Dr. Pauly's Lost Vegas. 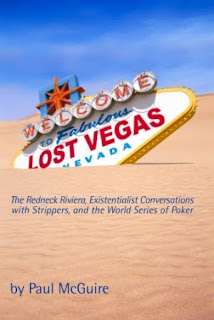 Hop over here for the skinny on the book
The blinds were at the point where no one had more than 10 big bets, and I was facing a raise in the big blind from the Hawaiian kid in the eight seat whom I chatted with a bit on the other tables.  A drink a hour was the pace but I was doing the Captain and Cokes more for the caffeine at this point and looked down at a ragged low hand.  Calling left me with three big bets and slighly more than his stack, and missing meant two more orbits as the prize money ramped up steeply (for me, remember I'm used to getting excited about final tables in chicken nugget buy-in online tourneys) from $1,000 to over $3K for fifth with $8,500 to the winner.  I made the call and as the dealer laid out a two low, all heart flop I checked my cards to see a lowly pair, a VERY weak low draw, and one heart but the Aica, HI native told me that he'd rarely played O8 and liked NLHE more.  So, immediately I cut out a bet and put on my face of granite.  A little sweat, a peek toward Otis, Mean Gene, the lovely CK (who finished 8th), Al Cant Hang, and F-Train and they all knew I was full of shit, but that didn't matter and would probably earn me a drink or two later.  For a few minutes my opponent hemmed and hawed, tried to half-muck his cards in order to get a reaction from me but once the pot got pushed I carefully slid those rags to the dealer and two hands later the Hawaiian was out and we were on break coming back to 50K/100K blinds and I'm holding just enough to squeak by an orbit without playing.

This isn't about that night which was probably one of my best gambling rolls I'd ever been on, and despite drinking for a solid 15 hours, three more 60-minute intervals of booze and Pai Gow would come because one does not refuse a drink (or four) from Al Cant Hang or the chance to watch an Otis  Degree All-In Moment at the Pai Gow tables with a greyhound resting in your hand. No, it's about the bluff I pulled which unfortunately is rare (because I suck playing poker sober) but the situation warranted it, unlike Mr. Brett Favre, my bluff did not cause the world's largest sport station to turn into a montage of my playing career.  One peep from "sources" and instead of Phil Mackey chatting on ESPN1500 about Vikings training camp and the resurgent Twins who looked strong against the Rays this week but fell short, he had to field questions about number four returning to the purple today instead of after week one of the preseason for the length of his noon to two spot.  Then at five p.m. with dinner at my parent's place, Sportcenter dribbled out Ed Worthless live from the Favre compound and another 25 minutes of filling up my favorite show with bloated "Favre is retiring" themes.

photo cred: here
You could have sucked up 100 days of oil spill with that vortex of hot air.  Good grief people, I about as rabid Minnesota Vikings fan as you can get and I'm sick of it.  After the news came out I fully ready to publish a Onion-like parody with Favre pulling off the biggest practical joke ever by screwing over the Vikes in last season's finale with the interception that erased a missed FG by Gary Anderson as the most painful Minnesota sporting memory, arm and arm with a laughing Ted Thompson behind the scenes shouting GREEN AND GOLD FOREVER from his trusty John Deere riding lawn mower in the middle of Lambeau.  But, the man gave me the most exciting year as a fan ever.  Even more than 1998.  For that he gets a little shred of respect and hope that the media circus pulls up its tent stakes quicker this year.

Just play or don't play Brett.  Either way, thank you.