If you like even an iota of sports you probably watched the exciting ending to The Masters yesterday and today thousands of bloggers will pummel you with Spaceballs quotes.  MAY THE SCHWARTZ BE IN THE HOLE!  HIS SCHWARTZ IS MUCH BIGGER THAN YOURS!  Somewhere Mel Brooks is gearing up the distribute Spaceballs the Loft Wedge and Spaceballs the Divot Repair Tool.

Just remember who set the trend before the South African even stepped up to the first tee at Augusta National.

Not really, I thought Bo Van Pelt and the rest of the crew from the Grand Ole Opry would gank the green jacket yesterday.

I looked up this morning and saw it was April already meaning time is not exactly slowing down for this multi-tasking white boy, but at I can open the windows now without fear of catching frostbite while typing up the Sunday Warm-up wrap at PokerStarsBlog.  Or mindless entertainment from DragonAge 2 which will be in place until the poker gods decide to stop the spankings that would make a submissive scream the safety word.  January to Mid-March = Awesome, Mid-March to yesterday = fuck you very much

See?  Poker whines can be condensed to small packages in which you owe no one a dollar and they don't hop screens to read about Paris Hilton's new favorite orifice to hide crack rocks on TMZ.  If I can find my Flip camera, I'll try to post a wonderful short documentary on How to Survive a Mexican Bathroom by drunk Drizz in which I don't remember a thing and my wife's photos from Facebook were the only reminder that I was there.  That and some bruises from trying to arm wrestle with a beefed-up gringo slinging $2 movies named Jhonny.  Oh, and extending my reach of degeneracy to the younger aged members on Nuevo Progresso as seen below: 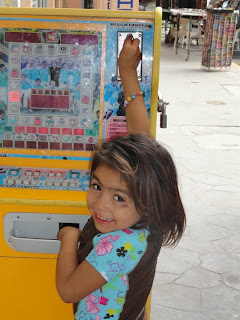 It's no Mr. Cashman, but the slot machine does pay out just not to me
I put in a dollar (12 pesos) and sadly did not win enough to feed the multitude of beggers along the streets.  But I did have enough for a Mexican Mojito which consist of nothing but alcohol with a faint splash of club soda.  Faint as in pouring as long as your four year old's attention span while Phineas and Ferb are on and you're trying to ask them what they'd like for dinner.
Good day.﻿
Posted by Unknown at 6:45 AM

If your whine is not costing you at least five bucks you are not doing it right. Just sayin'

A long time ago I began to spin slots, play poker and table games, but always only for fun and never for money. I never could have thought that you can really make money in an online casino and moreover a lot of money. But when he decided to play betvictor casino , he started winning even large sums of money. It was only then that I realized that their games could not only be fun, but also make a lot of money. It's nice when the entertainment is profitable, and often even significant.