Minnesotans live through the five to six months of winter for days like the two that passed way too quickly with several hours behind a desk when a multi-colored disc golf driver should have been putting a dent or three into trees at the Elm Creek Park reserve course.  The wind, minimal.  The skirts, short.  The sun hitting like someone set the outdoor thermostat to Perfect.  While I groaned at the piles of dead grass freshly raked by my wife knowing my two hands currently on a steering wheel would be wrapped around a similar rake for the next two hours, once I opened the door to the car and felt the warm blanket of my work-in-progress backyard there not enough hours in the day.

Pine needles, plastic golf balls, and crushed leaves were unearthed in the spring cleaning of sorts that becomes less and less each year as we discard the remains of the previous owner's wayward ambition to cover the spacious backyard too many trees that competed with each other for space and light and instead caused mass woodicide ending up in the Hennepin County compost site several year later.  Never met the man as he was divorced six years from the woman who sold us the house as she probably hid a snicker while selling and not informing us of the aborted attempt to recreate a green nursery in the backyard which was covered by three feet of snow at the time of the sale (won't mention the unusable driveway, torn roofing, and million other things the $250 home "inspector" managed to miss).

But, this was a happy time.  Wife threw some hamburger patties on the grill which gave my nose an erection making it harder to concentrate on the task at hand as seen by the several little scrapes along my shins this morning that feel like I hid a rabid squirrel done there.  Add a little Famous Dave's Devil's Spit BBQ sauce and I was in need of a tissue or two.

It was a good feeling, yard work done, school work slowly being chipped away while the Twins showed a couple of a rays of life in defeating the Royal while a mid-week adult beverage was most welcomed.  While sifting through Twitter making a 30 minute Finance assignment into two hours, there was talk about an article posted at CardPlayer which I was anxious to read, but not for the sunny reasons that I'd rather be on the open deck at 10pm.

Someone allowed this cockjob (who will not be linked for his fabulous poker skills as self-described at the bottom of the "article") to post a long winded rant, mostly about Team PokerStars pro Vanessa Selbst (who is likely more interested in repeating as the NAPT Mohegan Sun Main Event champ at the moment with fellow NAPT title holder and tournament destroyer Joe Tehan close behind).  The lovely Change100 was kind enough to do the dirty work and unearthed this filth probably while doing a little research for the current assignment, which is ringside at the NAPT's final table or possibly researching for the next gig while joining up with her soon-to-be two-time published writer Dr. Pauly in Lima, Peru.

Unfortunately, I got the edited version which likely cut out the juicy parts but left the ignorance of a player who had to bloat his "tournament winnings of 300K" from the actual 230K over six years (thanks for the research Mr. Schleger).  Honestly, if you think 230K = 300K either you hired an accountant from Enron or there's a 100% possiblity that you have stuffed your boxers with a sock in the past ten years to impress the ladies.  Luckily I don't have an issue with wang size nor telling people my actual poker winnings (enough to take trips, but not near enough to fathom playing for a living), just the fact that showing my sizable package to other ladies besides the TSA would catch the ire of the one person I enjoy showing it to.

But this isn't about me its about someone who took a misguided rant to a major part of the poker media that was better left on a personal blog or even a forum post (or if this guy had any fucking clue not written at all).  While Vanessa is due a huge apology, not the half-hearted disclaimer which currently sits a top of this 3am milky bowel movement after eating an undercooked $2.99 Grand Slam breakfast, the secondary problem is Cardplayer ALLOWING this to be published un-edited.  When I write for PokerStarsBlog it stays professional for the most part with some (funny probably only to me) puns to lighten up the poker hands because honestly, a little spice is needed even for the best cut of steak.  As it should.  "Calling out" those in such an ignorant manner should have their pink polka-dot blankees taken away, especially when ranting about players who are wildly more successful than the author! 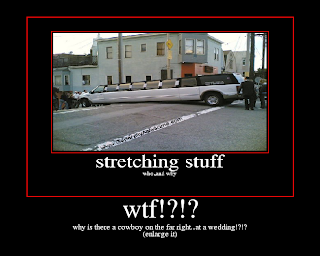 pic cred
For several paragraphs (and this is getting too long as it is) the author continuously shows his inability to understand that sometimes the best hand doesn't win in poker like its a bad beat thread on 2+2 circa 2001.  Wake up kid, start typing up your resume because you ain't gonna make it in this business by waiting around for Aces.
If anyone has the unedited version of his post I'd love to see what was changed.
Posted by Unknown at 7:37 AM

Wow that guy is a moron with so little understanding of poker. Makes me think I could make 230K and call it "over 300k".. LOL.