Children would be easier to raise if they came out the same way, had the same sleep schedules, and refused to eat their veggies with the same pout.  One book written by a billionaire author would be given to you as you peer thru the tempered glass at the little blue or pink blanket to raise your child from ages 0 thru seven.  After seven the rules and guidelines would get thrown out with last night's party leftovers, but before then parenting is as easy as taking a stroll thru a beautiful Minnesota morning along the Mississippi.

People don't live in the Matrix however.  Instead you get a new book daily that is drafted on the fly with every temper tantrum and hug.  Never knowing which side of the behavior coin is going to hit the deck after sending little number three with your last name emblazed on his back.  Last night it was my turn to take on the new project of introducing my daughter to sports.  As you may have read here, this is the child who will make kool-aid in a bathroom sink, pile two rooms worth of pillows to reach a box of Wheat Thins/Chips/Oreo cookies then proceed to lick the middles off of each cookie and put the box back in place.  I think a large monetary tip to cover her Kindergarten teacher's psychiatric care may be needed for next year.  To say my daughter is "strong willed" wouldn't do it justice, it would be like calling Phil Hellmuth "a bit into himself".  If she wants something, and you don't want her to get it, duct tape and/or welding her door shut might prevent her actions for a few moments until she figured out how to MacGyver the obstruction using her Barbie Princess Beauty Kit and clothes hangers. 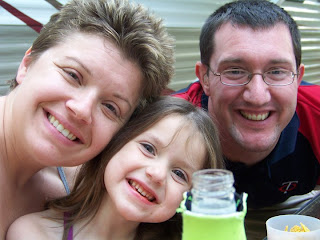 While the boy seems to be finding his stride after more "nice swing" than "bend the knees, chin up, elbow angled, etcetcetc" (thank you commentors), my daughter is going to take a different approach.  She doesn't feed off "nice swing" and regular encouragement, instead she will do her own thing until the rage of watching that little pink glove getting thrown to the ground happens for the 15th time ends with a kicking four year old getting hauled away to the car.  Although to her credit yesterday after the first 10 minutes of a Milton Bradley-like defiance, she let up and actually tried to scoop up a grounder while crouched in the hands-on-knees ready position for the remainder of the practice.  Its hard when your kid is the only one not waiting patiently in line and filtering thru like the others.  The stares of disgust from other parents do not bother me, but rather I feel as I'm failing her by not helping her become like the others.  Prim and proper are not in my daughter's vocabulary and maybe that's a good thing, as her intelligence leaks out in the form of not having any reservation to ask questions and try things when she doesn't understand.

Love her for who she is, but how does a parent mold such a child while not breaking the form that keeps her unique?  No, she's not a snowflake, but she's my kid and even while she's prone face down on the long patch of grass on Brittany Field and the urge to toss her in the SUV to drive away is seconds from happening, there's needs to be a way to enjoy her difference to my son's attitude, to the crew-cut boy next in line, to the red-headed girl already showing the freckles and alabaster skin.  Just one of a billion parents re-writing a parenting book that will never get drafted, and a billionaire author won't be able to publish those pages, due to the fact that each child IS unique.  And while my unique child did not earn Dairy Queen last night, she does me proud each day for being healthy and being herself.
Posted by Unknown at 6:37 AM

Email ThisBlogThis!Share to TwitterShare to FacebookShare to Pinterest
Labels: Parenting

Awww, you should have got her the DQ. A sugar high would have been the perfect addition to the day.

Sooo cuuuttteee!! But it's not her fault she's bad at sports, she lives in Minnesota!! Now, say, if she were growing up in New England, whole different ball game! :) Give the child her ice cream!

Hell, my daughter is easy to get along with, it's her mother that always gives me the problems. Of course it helps that we aren't together constantly so that Dad spoils her rotten when he does see her. It could change if I find her down here fr the next school year. I'll ask your advice if that comes to pass.