If you'll excuse the mixed metaphors and horrible spelling today as my workload has been a tad on the heavy side lately despite getting the two weeks off of school.  Three months ago the dates were circled on a calendar as my sister-in-law claimed some decent seats along the first baseline at the new Target Field.  Little did I know that picking up some work at Bluff Magazine along with my usual end-of-the-month final table wraps at the PokerStarsBlog would leave me with no sleep between pantsless reporting and champion spreadsheet jockey duties at the bullseye.  Boxer briefs with triscuit shavings were exchanged for a polo shirt and clean khaki slacks as the day of seeing major league baseball outdoors in Minnesota was a scant ten hours away.

After getting by on a concoction of green tea, migraine pills, and aerobic exercises that had my fellow cube dwellers taking second looks it was time.  This ride would be with the boys after my brother-in-law and E dropped in for a pre-game drink before heading down I-94 into the tip of downtown from the 4th Street exit.  Only briefly during the magical 1991 campaign had I seen the outskirts of a Minnesota stadium with such vibrancy.  The Metrodome was newer back then, hosting the 1987 World Series, NCAA Championships, and a Super Bowl in a short time span, but now sat dormant for the most part several blocks away as the Twins christened their new home several months ago.  After purposely parking on the rooftop to get a view of the new digs there was little reason to doubt why ticket prices went up.  Instead of a robotic sports game, you now got an open ambiance as seen by the huge jumbotron IN COLOR that peaked from the 5th street vantage point. 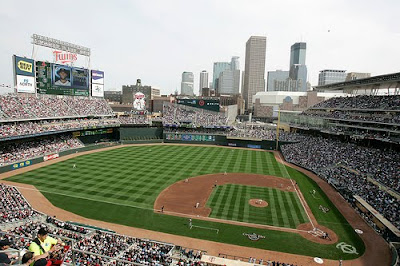 Target Field (link to original)
After getting down from the parking ramp, and crossing into Gate 29 sponsored by Treasure Island Casino we joined a sell out crowd for a Monday night game against the Detroit Tigers whom were just a half game off the pace as the Twins have been slumpping as of late.  The hallways jammed packed as people large and small donned Mauer, Morneau, and Punto jerseys.  And yes, one Favre jersey on a saddened 11 year old's face from the Iron Range hoping for football season to start with the silver fox behind our center once again.

But, that's a few month away before the helga hat comes out of the closet, for now the boys of summer were about to take the perfectly manicured REAL GRASS field.  And what a view it is.  From section 107 row 17 (which you can get a virtual tour of from the Twins home site here, just plug in the numbers).  You don't get the blue skies and tasty chicken strips with a Summit Pale Ale to wash it down with but a glimpse at seeing baseball the way it should be viewed.  The flattened seating makes you feel as if you're ground level despite being 17 rows up.  The sell out crowd would never get a chance to start out with a roar after the repaired Francisco Liriano took the hill and promptly started batting practice while spotting the Tigers four in the first inning.

I barely could move from my seat, but that was a personal choice, taking in every inch of the stadium as the Twins tried to claw from the 4-0 start. The pine trees in center, the Budweiser party deck similar to the rooftops our group has taken in at Wrigley for the past three years but built into the surroundings, and skyline views all made this an entertainment ticket, not just paying for the activity on the field.  Slugger on his last leg Jim Thome would place a ball over the left field fence, but it is not enough for the home team as they would lose 7-5.  Unlike year's past when most people would have labored up the steps before the last out, nearly all of the seats remained filled until the hometown hero blooped the last out into the 2nd baseman's glove.  After looking at the size of the crowd and seeing the clock hit 10:30 I figured it would be past midnight before getting safely back to the surburbs.  Color me surprised as my kid-marred Trailblazer was able to reach home a little after 11 as the streets flowed with little traffic unlike years past if the Metrodome acquired a sizable crowd and left many gridlocked for an hour past game time.

Worth the extra cost?  Absolutely.  Would do it again?  Let's wait till August when some friends from out-of-town drop by  :)
Posted by Unknown at 7:08 AM