Can Drizz Win One For The Gipper? 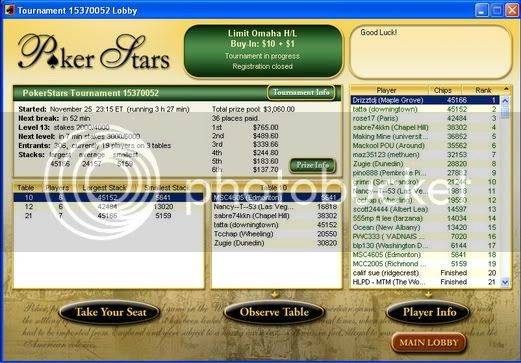 Its been a long time coming, but I may be heading to my second final table on Stars....

Since I cashed in two other MTTs tonight and busted with suckouts, I think the poker gods should grant me some passage here.

Sadly, the cards have been rather frigid save the hand that I luckly caught a set, then rivered a boat vs. two low draws that didn't get there.

Limit O8 is about extracting value, unfortunately there's not much value in the cards being shot to me at the moment.

Down to 12 now, I'm getting frostbite from the cards and my weak-tight game is steadily creeping in since its been too long to remember my last Stars final table.

Update: I scooped with AA33 ss, when I caught a low gets me in ok shape with 11 remaining

Update: FINAL TABLE BABY!!! Its fuckin 2:15am but I'm amp'd after a shitty day earlier

Update: Down to eight now, this is starting to get a little tense for me, as weak-tight Drizz from a year ago is creeping into my game, but I can afford to be a little selective with 10BBs in a limit tourney at this stage. Pino888 is by far the most aggressive at the table and has shown down some good hands.

Update: Shortstacks don't seems to be getting the memo about busting out. Sigh, one guy all-in 4 times, split each time

Update: Houston we have a disconnect, please add four fuckin minutes to his timer right before the damn break! I need a drink.

Update: Chip leader finally delivers a suckout-luckbox punch to the shortstack's aces right in the mid-section. Down seven now.

Update: Chip leader turns a nut-nut hand and another shortstack missed his straight flush. Down to 5 now. 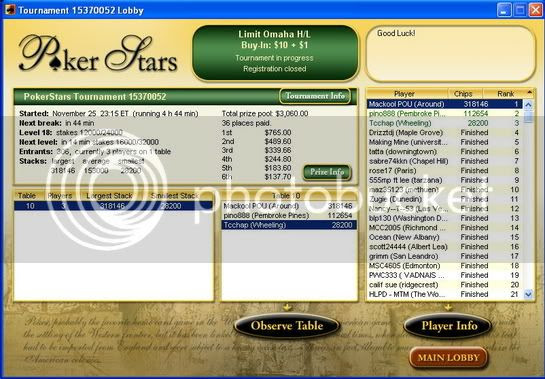 Update: Out 4th, Chip leader has the suckout power of 10 hoover vaccums, over taking my AA46 ss, with trip threes. He had odds and the cards so I shouldn't complain, now that its 3am I think I'm going to treat myself to a little rest.

Thanks to all the late night railbirds for your support!
Posted by Unknown at 1:48 AM