Take It On The Run 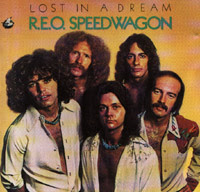 You take it on the run baby. If that's the way you want it baby.

"Take It On the Run" R.E.O. Speedwagon

Last night I figured out quickly I wouldn't have the patience in the cash games, so applied a hit and run to several different tables scoring a couple of bucks. Busting out in unexciting fashion a $11 LO8 MTT to someone calling me down with QQ77 on a flop of AA2, yes I had trips, yes I had 4 to a low, and yes he rivered a flush (not a boat...) calling all of my bets down when the low didn't hit.

But isn’t that the type of player you WANT in the game? Yes. I just hit the wrong side of the donkey truck and it hit me back. If the players are that skilled, I think I’m done playing the dollah tourneys (aside from blogger last longer bets in them) and will start to invade the $11 and $22, and on CJ-induced courage nights a $55 LO8 MTTs when they are available. Of course, these are just for fun since I’m not much of a tourney player but there's a need to become better should I grab enough liquid courage to join Al at the WSOP for their slightly higher buy-in of $2,000 for Event #8.

A man can dream can’t he?

After all, what’s the point of playing poker without taking a shot or two? I’m dead money at worst and slightly above average at best, but playing in the WSOP is a dream of mine that I’d like to fulfill before the whole southern fried chicken dinners catch up to me. I know I’d be better off trying to keep up with Al shot for shot while playing, but just to say “As of July 3rd 2006 I’m the 421st best O8 player in the world!” has a certain ring to it. Wielding a huge junk I’m sure has its advantages, but we all know it’s the poker prestige that gets the harem of poker groupies that currently hang out at Bobby’s place.

But isn’t that a lot of money for a low limit plodder like yourself?

Um, yeah. Maybe it will have to wait till 2007, but like Danny N. has stated, it could become the World Series of Hold Em’ by then.

I dunno maybe it’s a pipe dream ala Mikey McD. I know I’m over my head in thinking I can be semi-competitive at that level. Maybe I’ll over-think this like every other minor issue in my life. It’s tough for me to break my routine and do something “irresponsible”. I’m a husband, a father (hopefully 2X father in several months…), I have responsibilities to upkeep, and I like those responsibilities. I like the fact that Little Drizz depends on me to go work and bring home a paycheck so he can enjoy the Shrek fun fruits he likes to snack on.

So, why the Catholic guilt?

Do I need to get sloshed every day for the next 8 months to let my inhibitions down enough to follow through on this? Say a few Hail Marys, help others in their time of need, and attend mass on Sundays? It is my decision, since the caring wife as stated that poker money is mine to control whatever I wish to do with it so that’s a non-issue. But the little devil and little angel sitting on my shoulders are duking it out for control.

Okay end incoherent rambling, but maybe some bloggers who have stepped up past the grind into the bigger games would have some insight how they got past the block in taking that shot.

Last night was Trickortreat night for Little Lestat (cute pictures to come later this week), as I was surprised by the amount of homes that were giving out candy. At 75% of the house around our neighborhood had their lights on and 50% of those had costumes on when Little Drizz stumbled up to utter “trickortreatthankyou” as fast as possible to ask for a soda or a pencil at least of them were creative. It was refreshing to see all these neighbors ready to take on a flood of kids in this older neighborhood, granted it wasn’t the streets flooded with hockey players, hobos, and ballerinas as when I grew up, but it wasn’t the ghost town that I saw last year while taking Little Drizz on his first trickortreating run.

He made away with quite a haul that I’m sure will sedate the pregnant wife's chocolate needs for at least a day or two. The hardest part was convincing him that we would put away the candy for a later time as he wouldn’t let go of the plush pumpkin used to snag the chocolate prizes.

Ok, I’m sure you’ve had your morality tested like this in much much more important matters before, but in case you haven’t what do you do in this case…

You finished your day as Cube Monkey #1122818, shut off your monitor and grab your bag and Tupperware container with dry tomato sauce crusted on the sides from lunch and head for the exit.

For unknown reasons you look at the floor and spot a piece of paper. Being a good cube monkey who doesn’t fling poo, you pick up the piece of paper and get ready to discard it properly. But this is no ordinary Office Max office copy paper, it’s a twenty dollah bill!

Oy. Do we consult with the angel and devil?

I didn’t need to. I handed off to a long time co-worker who works in the area that I found the $20 and she said she’d handle it. Maybe I was naïve to do that, but hey it’s not my money, I didn’t win it, and I’m sure whomever dropped it needs it more then I. Yeah, sainthood here I come. Mother Theresa? Pfffff, I didn’t take a twenty, all she did was feed like a million starving kids.

Thanks for dropping by, now check out Doubleas’ "what would you do" series of post, taking you through the thought processes of several hands in the $10/$25 NLHE ring game. The decision to call an all in with just an overpair on a flush board definitely gets the gears running. Especially when you only have 40 seconds to make the decision to call bullshit or not.
Posted by Unknown at 6:08 AM