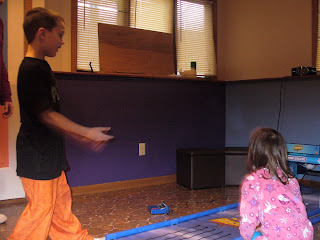 Its Vikings Sunday and the kids were up early playing with a mini-bowling game that was bought years ago and found after some massive cleaning around the house. Much like the Vikes will be doing today against Sulkathor and the preseason NFC North favorites Chicago Bears. 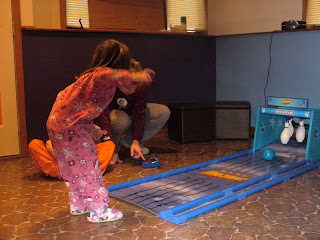 A "trap" game perhaps but the Vikes seem to have hit their stride the last few games easily putting away the woeful SeaChickens and Lions. Purple Jesus should be limited today due to an ankle injury but this game should present the return of defensive glue Antoine Winfield meaning Sulkathor won't be able to rely on Matt Forte to overcome a sure four interception day especially with Vikes becoming a top five rushing defense even without their backfield run stopper for the past month. Winfield is a late scratch, gah.

I mentioned at the beginning of the season how the media was going to start with comparsions of these team to the fabled 1998 squad should their record match the expectations. Here's Star Trib writer Jim Souhan with a comparsion of the two offenses (it appears to be "premium content" sigh.). Let's hope Longwell hits the field goal this time in the NFC championship game.