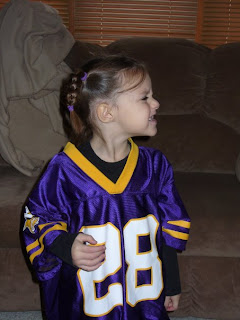 Holiday week means quick hits since everyone looked my calendar and said: "hey let's schedule everything for Monday morning since we know Dave is a bright and chipper morning person!"

Or writing in general for that matter. Whether the subject is my kids (as seen by Kyra's game face), being a homer for this "fly-over" state's teams, or a pissed off rant about people at Costco who can't calculate the force neccessary to push their jumbo sized cart in a manner that doesn't ram them into my ankles. I know my ass is becoming a thing of beauty better enshrined on the pages of GQ but please keep your distance.

You could quote Denny Green's "they were who they thought they were" line yesterday as the Purple broke out of their slumber after the first quarter to put away the anemic Seattle Seahawks 35-9. After the 0-0 tie, someone got Favre out of his afternoon nap time by turning off the World War II synopsis on The History Channel just in time to go out and tear down the SeaChickens' defense for two quarters and get back to the 52" Tobisha during the fourth quarter just in time for the D-Day invasion complete with milk and cookies.

The old man jokes won't fade here, but good grief he looks someone playing Madden 2010 on easy mode. 22 of 25 and four scores, including another cartoonish catch by Sidney Rice in the back corner of the endzone (to those who selected Mr. Rice in your FFLs and dropped him after a few weeks, I point and laugh in your general direction). The talent was always their since this Gamecock arrived a few years ago, but injury and T-Jack's wounded ducks limited his potential. The receiving core has fed off the 40 year old number four, and vice versa. Combined with seemingly unlimited time to throw and giving himself time to throw, Favre alone with Purple Jesus have given the team the balanced offense they've been looking for.

The real shut out was on the other side of the ball as the defense locked down the Seahawk's offense with a parade of three-and-outs and limiting their running game to four yards. Four. Not forty, not five, just four on 13 carries. Which was to be expected since Hasselbeck has been called on to throw more than 50 times a game throughout the season.

The Vikes did what was expected of them unlike the team who gave the Purple their only black mark this season. The Chiefs? You let a team led by a backup quarterback, suspended All-Pro receiver, banished All-Pro running back, and all around asshole coach, win? Not good was seeing Big Ben taking a smack upside the head as the Steelers will need the oversized quarterback if they want to defend their title against the Vikes this winter.

Another WTF goes to the resurgently retreating Bengals who have scored several big wins this year only to lose to Oakland yesterday? Who Dey, not OK. Which team is going to show up at the Metrodome in three weeks? The one that beat the Steelers and Packers on the road, or the one that laid an egg yesterday against a squad better suited for the soon-to-be defunct UFL. I know the promising season of Cedric Benson was curtailed by injury but Palmer has a decent crew of receivers to go with a top five league-wise defense to overcome this.

T. J. Houshmandzadeh might be contemplating his career choice as he been on the opposite side of the sidelines yesterday, but another high priced free agent that was rumored to land here will get his shot this week to prove he made the right decsion. Sulkathor Cutler threw passes to various green-tinted jerseys last night much like the week before when it counted and lost the game for the Bears who come into town in a game that would wrap up the NFC Central divsion with a Vikings victory (yes, I'm aware that is fuzzy math go have another triple latte and smell the over priced coffee). Jay was also rumored to be coming here and had this author rather giddy at the prospect, except its Favre throwing touchdowns like Cutler, while Cutler throwing interceptions like Favre was supposed to. The pick by many NFL talking heads at the beginning of the season to win the NFC Central is one toenail away from going over the cliff into non-playoff territory. Lovie Smith will have even more on his gameplan plate as Winfield should be healthy enough to start this week and will benefit from Cutler's ability to hit cornerbacks in the numbers versus having to dive or annoyingly cut in front of receivers to obtain interceptions.

Tomorrow: Team Wheelchair is born for the Up for Poker Winter Classic poker tournament and a few tips about the upcoming WPBT trip. First tip, don't ever become a story about being wheelchair drunk in Vegas.
Posted by Unknown at 6:12 AM