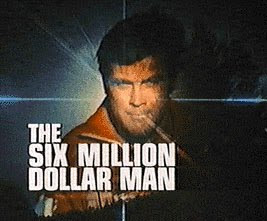 Oscar:  "Steve Austin, astronaut; a man barely alive. Gentlemen, we can rebuild him."

My restoration from head tramatized victim sitting around feeling sorry for himself and dragging those around into my quicksand filled pool of self-pity, into something that can be viewed with a chin up  as the mirror reflects that newly built person.  Each day the hugs are little are a little tighter to those within my albatross wing span.

Oscar:  "We have the technology."

While drugs may work for some people, like my wife, they actually stomped down the kid who was once highly regarded for his charisma and intelligence despite the awful hand his body gave him.  A speech and hearing problem are just asking for it in the schoolyard for the cruel jokes easily come when the target cannot respond.  Instead, years of speech therapy and now hearing aids that make a difference thanks to the advancement of such devices in the past two decades I could enjoy things like conversations in a crowded casino or hearing the exact pitch of my kids' whine to know what tactic to take while calming them down.

Oscar: "We have the capability to build the world's first bionic man."
At this point, there's hardly a recognition to myself five, ten years ago.  Then again thanks to Sir Issac Newton's laws and weighted objects my memories of such dark times fade to nothing more than Iraq's chances for gold in Men's Hockey.

Oscar: "Steve Austin will be that man. We can make him better than he was before. Better, stronger, faster."

There's no aspiration to come more than a doting parent, a good friend, cruasder of injustice.  But, working out several times a week, heading back to school as soon as Arizona State finds my very expensive one year transcript of study in Tempe, and having a clearer mind on what's important besides yelling at a 15" laptop monitor when virtual cards do not fall the way the heavy percentages have determined.  Better, stronger, faster may sound like description of an automobile, but they can describe the recent events uptop of my head.  The mind will always be rum-soaked dripping with sarcasm at a moment's notice, it will also never release my love for gambling, cards, and nights where "puke and rally" is a theme.  But becoming something different from that death wish the person had while laying out on a puce colored hand-me-down couch waiting for paramedics to arrive after a nasty allergic reaction to medication nearly eight years, is now my new life.  That person could have just allowed the reaction to continue until his throat squeezed life from him, instead he took the phone and choked out some words to 911 which bring me to today in front of all of you as new person.

Well, same person, just rebuilt and ready to kick some academic ass in a two months.
Posted by Unknown at 7:11 AM

Email ThisBlogThis!Share to TwitterShare to FacebookShare to Pinterest
Labels: Self Gazing

Steve Austin had the bionic eye.

It was Bionic Woman who had bionic ear

Very informative article here .I did not know this issue before.Now i got to know everything about amazon. It is very good website,and i have been using it since one year.I did not face any problems in amazon .So it is bad to know about sale tax issue of it .I hope it will be resolved very soon.Thanks I Want Sex