I failed once again to gain points while playing in the Hoy last night, mainly from stellar plays that resulted in getting short-stacked and resorting to a suckout just to play on for another thirty minutes.


Amazingly, I was still participating in a small buy-in PLO8 tourney by the time I managed to push JJ into QQ and unceremoniously exited the blogger's realm and leapt back into a bigger donkey pit.

Only these guys don't joke, and were dead set on wagging their e-penises around while flaunting Sharkscope and Officalpokerranking numbers. I'd be willing to bet their work uniforms still smelled like day old McGriddles and industrial strength floor cleaner while berating the big stack for pummling the competition into submission.


No, that wasn't me wielding any four cards with a Trump Tower sized chip stack and winning.


I did the exact opposite of my "F" game that was shown in front of well-respected MTT bloggers, and Waffles. I played patiently with just a hint of granite, sweetened by some timely bust outs to make a little money on the night after realizing I was out of tier one tokens and had to buy directly into the Hoy. $26 may not seem like much, but as I've mentioned several times, I don't like playing tourneys in the first place and any tourney buy-ins above $5 could be better spent on Wii gadgets like this. But, throwing $100-$200 at a coin flip in a cash game is perfectly acceptable!


With 23 left, the payout grid noted I had to play 6th to break even for the evening. Sitting 8th for the start of the final table didn't improve my outlook as the Twinkies to my left were getting ready to implode in extra innings. In the basement some unfolded jeans, spring jackets, and panties awaited my departure from the micro tourney, but they would have to wait until... 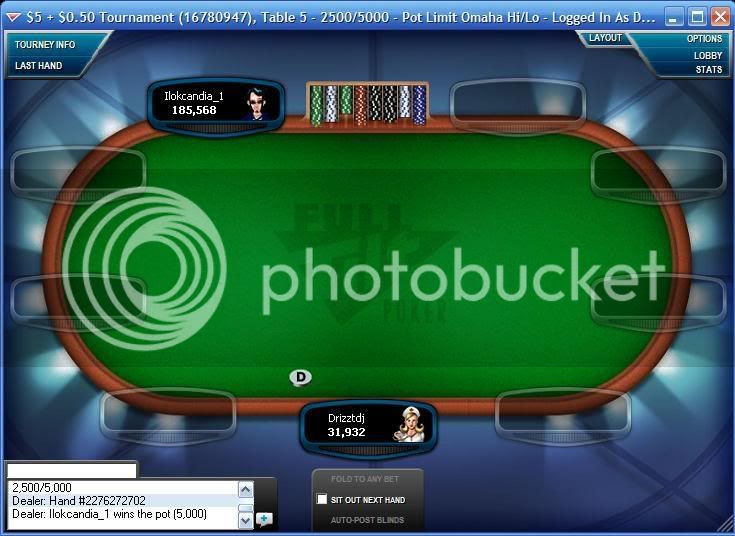 I lost to the huge chip leader somewhere north of April 23rd bleeding into today. But, 2nd of 154 doesn't suck.

Hopefully this variance reversal last a little while longer because I'm getting dangerously close to an amount that would allow me to spend a few days with some invisible internet friends during the WSOP.

Thanks for dropping by, now drop by Pokernews and give Pauly, Change100, Flipchip, and Amy some love as they tackle the WPT Championship!
Posted by Unknown at 6:13 AM