Me, Myself, and I

Its only 6:50am and I've been been rejected by a vending machine (GIMME MY MINUTE MAID CRANBERRY JUICE!!!), had my favorite client (heavy on the sarcasm lever here) leave three messages about the same thing that could be taken care of over an email (but she'll never send one), someone swapped my computer thus deleting all my links to my work functions and it restarts every 10 minutes uploading some inane programs that I don't need, and to top it off Little Drizz fell while dancing around on a toy box giving him a good size bump on the back of his head.

Long morning after me and BG were defeated in the WPBT Euchre tourney by the All-world and 28th ranked poker blogging player Bobby Bracelet and soon-to-be inducted into the South Carolina Moose Lodge poker hall-of-fame Otis. Against the ropes they battled back valiantly to win in five games. Well played guys, I have no doubt whoever won that game will win the tourney. I smell a prop bet in there...

While growing up my mother introduced me to bowling. There have been several lanes that I fine tuned my ability to play pinball (my favorite being the Addams Family one) and other video games for large blocks of time with minimal financial means. There was the old Montecello Bowl. An oversized tin lean-to with 8 lanes and a bar that served Schmitt, Schmitt Light, Schmitt Bock, and Miller High Life. I look back and wonder why my parents would travel 30 minutes to bowl there and still can't figure it out. The "arcade" consisted of a Ms. Pacman machine complete with cigarette burns, some turn-a-quarter into a palm-full of old candy stand, and a Brunswick ball shining machine. When I wasn't begging for mom to throw a strike which meant another game with my bow-tied mistress or some M&Ms, I would watch these grown adults chain smoke while tossing their 16 pound bowling balls down the lane. Great way to introduce your son to adult life.

Five years ago my parents started bowling at Spectrum lanes. During my youth, I would bike the mile and a half (using super cool shortcuts through the neighborhood) up there on a free summer day to snag a twist ice cream cone at McDonalds, then spend the rest of my allowance at the bowling alley between throwing a house ball down the lane with a palmed hook and at the arcade which had Street Fighter and Galaga to eat up the rest of my hardly earned cash. I was a fairly shy and lonely kid facing self-esteem issues back then and bowling was a fun, solidary activity if you were not on a team (which I wasn't). I didn't have teammates judging me if I didn't throw strikes, overthrow a cut-off man, or pop-up a sacrifice bunt. My ability to bowl was/is not spectacular but it was my time away from reality, my space to crawl into so I didn't have to hear the heckling about my thick glasses, or my busting the bell curve on a math test, or my hearing, or my goofy speech patterns. Me, myself, and I.

I have won awards/trophies for math contests, golf, hockey, baseball, volleyball, softball, even online gaming. But never before have I won something in the one activity that got me through the akwardness of growing up. 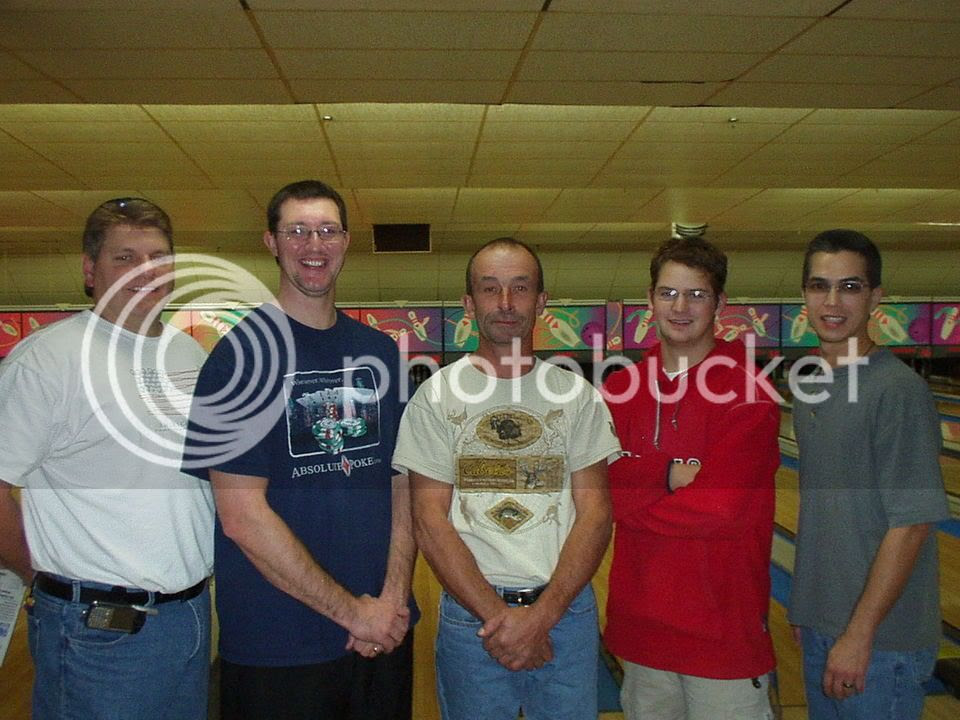 That's the lineup of 1st thru 5th (going from right to left) at the Twin Cities Challenge at Earl Brown Bowl this past weekend. I'm the tall guy with the stupid smile of someone who downed three tall Leinie Honey-Weiss' a tad too quickly and the Absolute Poker *shudder* t-shirt that came in 4th.

The tourney pitted the top 10 Minneapolis bowlers and St. Paul bowlers from a tourney two weeks ago for most improved average in a freeroll for a $600 purse. I took home $75 in my 4th place finish. Which will probably cover my tips to the waitresses at the IP while playing poker and early morning Pai-Gow at the Coast in Decemeber.

I got my wife to finish up a PLO SnG on Full Tilt the other night with 7 people remaining while I tended to Little Drizz's reminders that he needed a story read to him before going to sleep. A hardcover Dr. Seuss book to the face of the parent is a good way to convey your message when you're two. After MrsDrizz knocked out the fourth place guy with a set of aces, even she got excited... for about five seconds... as I came back down stairs and she was already bored with the game but I urged her finish up the tourney (she took 2nd) hoping she'd catch the poker bug. I tried but it looks like poker in my household will be played by Me, Myself, and I. (at least till Little Drizz is ready from BadBlood's chip challenges) .

Thanks for dropping by, now go here to learn more about bowling and why people seem to play better during the 2 for 1 league specials.
Posted by Unknown at 6:48 AM